For readers not so familiar with the Japanese digital landscape, it's an excellent overview.

Also a reminder that Japan shows key differences to the US and Europe in the digital space. As in other categories, local solutions have emerged in parallel to the global big hitters.

Here are are five headlines from the data that illustrate this point:

The common feature of Yahoo! Japan, Rakuten, LINE and mercari is that as platforms they cater for local tastes in terms of style.  And in the case of LINE and mercary, mobile functionality as well.

The following 4 charts show the overall digital landscape in Japan in terms of both monthly average usership in 2015 and the year-on-year (2015 vs 2014) trend in growth of usership: 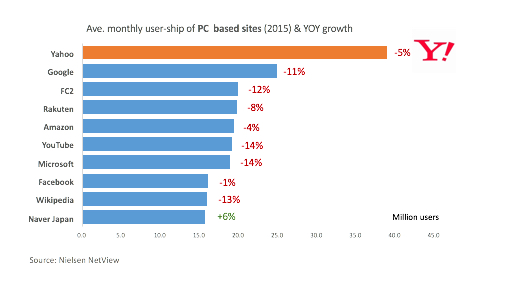 Comment: Yahoo! still dominates over Google with over 50% more ongoing search being conducted.  It should be noted that Yahoo! is quite a local affair being a JV between the US Yahoo! and Softbank. 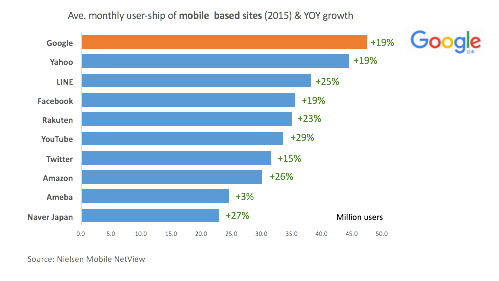 Comment:  all the major mobile sites are growing strongly.  In Japan the mobile platform really means smartphones.  Imagine commuters doing their search, mail, social media, news, gaming, entertainment or shopping while commuting and you'll get the picture.  Mobile e-commerce in particular is has been surging.  Amazon and Rakuten are among the fastest growing mobile sites in terms of usership. 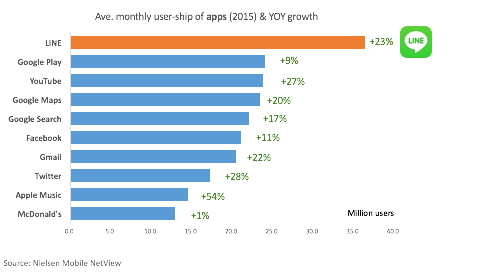 Comment:  LINE is the all conquering app of the last year.  We look more specifically at its success and benefits for online marketing in this post.  Note how the use mobile video is growing strongly.  And beyond YouTube, this is an area that LINE is also now focusing on.

Comment:  The online C2C shopping app mercari has more than tripled its user base over the last year.  We look at the drivers of this growth in this post.  Mercari has become Japan’s first ‘unicorn’ start-up and is now turning its sights on the US.

This overview of digital in Japan shows us that global players such as Google, Facebook, Twitter and Amazon are becoming increasingly important in Japan.

At the same time though local sites such as Yahoo! and Rakuten remain big volume players.  They still play an important role in bringing online shoppers and products together in Japan.

Finally, expect apps such as LINE and mercari to become global players in the own right in the coming years.